Today If Your Marketing Campaign Doesn’t Integrate Social, It’s Not A Campaign

In the last decade, there has been a seismic shift in the way consumers use media.  Yet despite this, most marketing plans are still designed as if they were in the Mad Men era- centered around a :30 second TV spot- with radio, magazine and outdoor sprinkled in (as well as a banner buy thrown in to cover the interactive thing).  As Forrester analyst Nate Elliot recently pointed out in a report on the power of social media for marketing (under the not so subtle headline “The Old Marketing Model Must Change”), this is kind of a little ridiculous given how media consumption has radically altered.

As Elliot pointed out:

In addition, Forrester’s research shows that today three-quarters of online users engage with social media, and 23% use social sites several times per day- which is why their strong recommendation is for marketers to “use social media to power every layer of your brand ecosystem”. 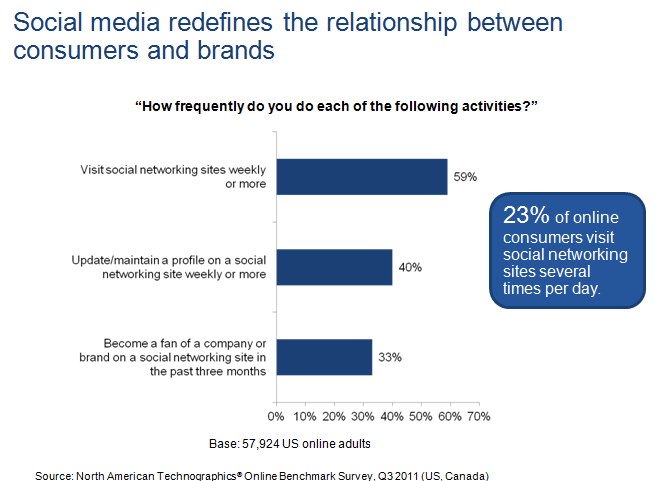 The key in developing an effective marketing approach today is not necessarily just to shift money from TV to social media, but to make social an integral part of every plan you create. As Elliot says, “The best programs we’ve seen start with a fundamentally social idea and then use that same social concept for every layer of the ecosytem.”

So what do campaigns that are truly built around a social idea look like?  A great resource to learn is Forrester’s site highlighting the Groundswell Award winners. These are top social campaigns that they’ve judged to be the best of the best each year. Some notables: Weber Shandwick’s Livin’ Large with the Chevy Aveo campaign, House Party’s promotion for Hershey’s Bliss chocolates (where they signed up 10,000 people to throw parties), and one of my all time favorites: KLM’s “Tile & Inspire” campaign which invited consumers to design a tile that put their face on the side of an actual KLM Plane. Check out the Video below of the KLM campaign if you really want to get blown away by a great idea pushed out brilliantly via social channels (this video alone has almost 800,000 views on YouTube).

Once you explore some of these award winning concepts– ones that really show the impact you can have when you build a campaign around a great socially engaging idea, I doubt you’ll ever go back to your TV-centric Mad Men ways.

This entry was posted in Social Media. Bookmark the permalink.